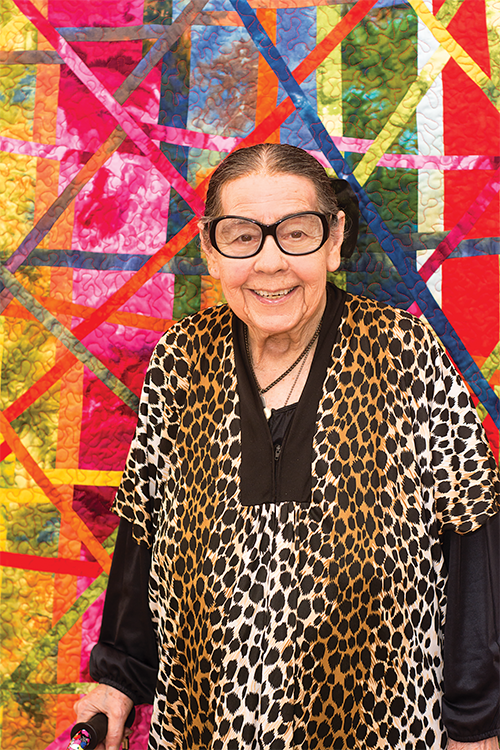 Ninety-year-old fiber artist Mary Craik was born on West Market Street, lived in 10 different states and two foreign countries, returned to her hometown, and now lives and has her studio and art gallery on East Market Street.

How did you come to be a fiber artist?
I was in my 70s before I started doing my own art. I had taken classes in art history and art appreciation. I always visited art museums wherever we lived, but it never occurred to me I could do it myself. At first I tried painting and had a ball but knew enough about art to know I wasn’t a painter. I had been sewing since I was 8, and when I saw a show here in Louisville called “Fantastic Fibers,” I decided to put my sewing skills to work.

What is the best advice you ever received?

(Laughs) I tend to give advice. But, in 1976, I was a university professor at St. Cloud State University in St. Cloud, Minnesota. I filed a class-action sex-discrimination lawsuit against the university after being turned down for a promotion. The magistrate ruled that there was no discrimination. That was on the same day that the Equal Rights Amendment failed to pass. I was devastated, but my attorney said to me, “We should appeal. You can do this, Mary.” That was the best advice. It paid off, and the appeals court ruled in my favor. I used the money I received from that ruling to set up a scholarship fund for women at the University of Louisville.

What should a woman taste at least once?
There are so many different ethnic foods. One shouldn’t be afraid to try anything.

What skill should every woman have?
What has helped me is the ability to problem-solve. A woman must develop skills that will provide her with an income so she can be independent and not have to depend on a man for her livelihood.

Read more about Mary in our What I Know Now feature in the summer issue (page 6).

Do you know what your attachment style is? We all

Looking for a home decor refresh? We visited three

Technology is not just for the younger generations

Volunteering has been a way of life for 82-year-ol

When mild days hit during winter, getting outside

Winter is often the time when we think about comfo

A warm cup of coffee and the Louisville Orchestra?

We've got some fitness inspiration for you this Ne

Flavonoids are antioxidants that can help reduce t

Looking for something to do this New Year's Eve? O

This winter is all about comfort, and we've got a

Throughout our school days, we learn about the imp

Need some last minute gift ideas for that not-so-y

Connection is an important part of life; however,

Just in time for the holidays, Bishop Bob Mueller

Looking for unique gift ideas? We found a store th

The perfect dish to share on holiday mornings! Thi